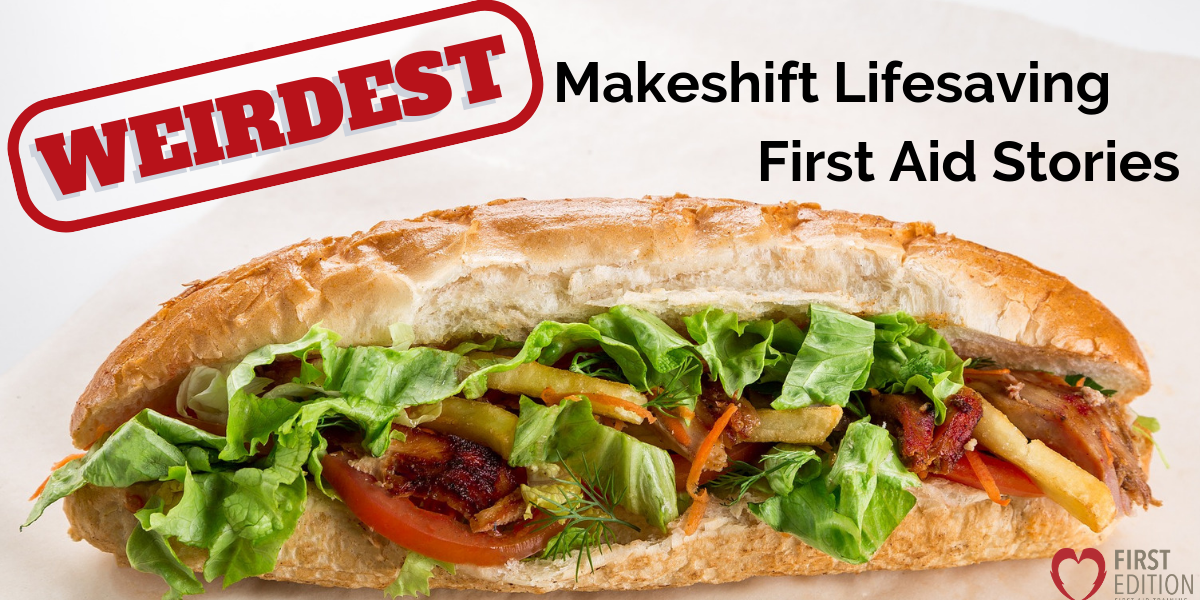 When emergencies occur, we do everything in our power to help. Sometimes that means doing CPR for more than 30 minutes and other times it may mean that you are using what is accessible (and a bit weird) to save a life. As much as we hope that there is a first aid kit around when things take a turn for the worse, that may not be the case. In times like this we need to get creative… sometimes creating make-shift first aid solutions with what is around us! Take a look at these strange lifesaving first aid stories that allowed someone to jump into action, even when a first aid kit wasn’t available.

We always hear that what we eat can keep us alive longer, but what we never discuss is how food items can help us in other ways too! Take for instance this lifesaving first aid story where a sandwich was just the thing to save a life!

After being attacked by another man outside of a flat, James Hobbs tried to keep off his attacker but was slashed with a knife to the throat. James fell to the ground and knew that he needed to cover the wound so that he would not bleed out. The thing most readily available for him to use? The kebab sandwich he had in his hands at the time of the attack! Holding the kebab against his throat until medical help arrived, James lost about six pints of blood, but it was just the thing to save his life until he could be rushed to the hospital to make a full recovery.

Burn – Pitchers of Juice and Water

While out at a café with her family and grandson, Shirley never would have guessed that she would be using anything possible to reduce a burn. The family was enjoying themselves when the small child reached out and grabbed a hot cup of coffee, pouring the scalding beverage over his legs. Thankfully, having completed a first aid course just a few weeks before, Shirley knew her grandson needed to cool the burn quickly. With the child, she raced behind to the café kitchen and sat the boy on the counter. Shirley grabbed the cold jug of water and poured it over his burnt legs. After the water jug was emptied, Shirley grabbed the nearby juice pitcher to continue the process. After being brought further cold water jugs by the staff, the boy’s burn had cooled and only remained red thanks to Shirley’s fast and lifesaving first aid!

While walking home from work, Sam came across an unconscious man lying on the road. She walked over to him but was unable to get a response, although she could see he was breathing. After calling for emergency assistance Sam identified that the man’s head was bleeding, but she was unsure just how large the cut was as it was dark and blocked by his hair. Knowing that she needed to stop the bleed right away, she removed her hoody and placed it upon the man’s head. Emergency responders arrived just as the man was coming back to consciousness, and he was rushed to the hospital and survived. If it was not for Sam’s quick thinking, this man may not have survived the night!

Before getting on a 14-hour flight, Paula had been in a motorcycle accident on the way to the airport. Feeling fine except for complaining of a hurt arm, the flight took off with her on it. It wasn’t until later on the flight that she knew she required further help. The doctors on board splinted her arm, but quickly realized that she also had two broken ribs. To make matters worse, it turned out that Paula’s left lung had collapsed and fluid had begun to enter it. The two doctors on the flight decided that the woman required immediate surgery to drain the lung.

The plane was equipped with some basic first aid items, but nothing that would assist them in a complex surgical procedure, so the two used what they could find – a catheter and a coat hanger. Putting the coat hanger in the catheter, they created an incision in the chest to drain the fluids. Meanwhile, only having a small amount of local anesthetic, Paula was awake the entire time watching it all happen. Thankfully Paula was stable once landed and brought to the hospital for a full recovery. Although it may have been a dangerous solution, if it wasn’t for the doctor’s creativity and quick-thinking, things may have not ended as well!

After raising up his truck, Sam Ray slid underneath trying to solve a problem he had been having with the vehicle. It was while he was beneath the truck that the jack fell apart, bringing thousands of pounds down on top of him. He was the only one home at the time and no neighbours were in the area to hear his shouts for help. Sam was completely stuck and could not move at all. It was only when he tried to shift his leg that the movement pushed the home button on his iPhone and Siri responded. He was able to talk to Siri and ask the AI to call for help. Once he was connected to a local dispatcher he was able to yell out for help. The dispatcher heard his distressed cries and was able to track his location through the cell phone signal and sent first responders to his location to come and free him.

Although pocket dials and accidental activations of Siri may be annoying at times, it is another story when it allow us to reach out when we are in trouble. Using the hands-free feature offers you the chance to connect with others when can’t get to your phone.

It is always hoped that a first aid kit is nearby, but you never know when you may find yourself in situations where you need to get creative. Understanding basic first aid principles enables you to use what is available for lifesaving first aid! There are plenty of things to help ‘make-do’ in the meantime!

Don’t know first aid? Grab the family, work team, or your hiking group and register for the group first aid courses available with First Edition! These skills could just save a life!

Why First Aid is Important in our Communities
March 5, 2021

Basic First Aid You Should Know for the Snowy Canadian Winter Months
February 1, 2021

The Importance of First Aid Training at Any Age
January 4, 2021

Home Safety Essentials You Need to Have to Protect Your Family!
August 24, 2020

7 Groups That Really Should Get First Aid Training Together
August 10, 2020
Go to Top